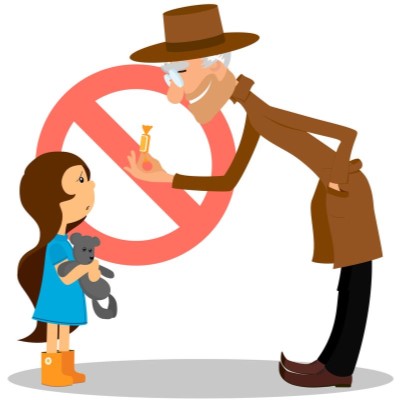 I have fond memories of the fabric shop that my parents owned in Chinatown when I was a child. I used to sit atop rolls of colorful textiles laid on a table outside the store front, watching the hustle and bustle along the streets of Spadina while my mother tended to customers inside. It was sitting atop those rolls that I was almost lured into a stranger’s car when I was six-years old.

I was a careful kid. I had learned about stranger danger and I watched warily for seedy strangers lurking in dark corners, waiting to snatch me from the shadows. This guy was different, though. He didn’t act like a “stranger”. He was normal, even nice-looking. He stopped his car in front of the shop, rolled down his window, smiled and called me over to help him with his map. He was lost and needed my help. I hopped off my fabric perch, eager to help him, even though I could barely read and had never seen a map. But before I could reach his car, my mom came outside with a customer and he sped off.

At the time, I didn’t realize that I’d had a near miss with real “stranger danger.” I was just disappointed that I didn’t help the nice man. It was only as a young adult that I recalled that day and realized the gravity of the encounter. When I became a mom, I worried about the thought of children being lured like I had been. This concern followed me as I later became an elementary school principal because I knew that teachings about stranger danger had not evolved from what I was taught as a child, which had left me so unprepared for the nice man with the map.

Instead of teaching our kids about stranger danger, we should teach them about “tricky adults” instead

The very concept of “stranger danger” ignores the fact that 88% of child and youth victims of sexual offences know their abuser. So, where does it come from and what are the consequences of always perpetuating the myth that strangers pose the greatest threat to our kids?

In a recent M.A. thesis entitled “Perilous Parents and Sinister Strangers”, University of Guelph graduate Carleigh Smith notes how the idea that strangers are the most imminent threat to children is part of programming among media and educators. It functions by always othering perpetrators of child abuse as people from outside communities and families as a way to unite those groups against the abusers. And yet this perception is ultimately inaccurate and its consequences are dangerous. As Smith notes, “This could lead to the inability for people to see the warning signs of the true child abductors, parents or family members.” (72) Further still, it makes predators seem like monsters – ie. completely unlike those closest to us when nothing could be further from the truth as in the case of 11-year old Riya Rajkumar who was abducted and murdered by her father.

In most cases, predators who target children intentionally appear friendly and non-threatening, not like the lurking monster that kids envision when we warn them about stranger danger. Predators use tricks and charm to groom and lure children and take advantage of relationships of trust and authority. Talk to your kids about personal safety, boundaries and common lures and grooming techniques used by “tricky adults.”

We raise our children to listen to adults and be respectful. This is especially true in our Muslim community, where we are taught to call everyone aunty and uncle. Child abusers in positions of authority or closeness take advantage of the trust of their child victims and the trust of parents and guardians. Therefore, the number one most important thing that a parent can do to protect their child is to listen to them and believe them. It is also important to have ongoing, age-appropriate conversations with children about their bodies and consent. These conversations are not just about teaching kids how to respect other’s bodies and right to consent, but about teaching kids that they have a right to control their own bodies. Kids who understand their own bodies and boundaries, and are able talk about these topics without shame are better equipped to recognize unsafe situations and to talk to a trusted adult about them.

Instead of instilling fear, we can empower our kids to protect themselves by arming them with practical personal safety knowledge that is realistic and honest about the ways that unsafe adults may try to manipulate and “trick” them. The Missing Children’s Resource Centre has a pamphlet of common lures and ways to talk to kids about these “tricks.” Practice practical ways kids can respond to lures, such as leaving unsafe or uncomfortable situations; responding loudly and assertively to tricky adults who are asking them to go with them; identifying safe adults in public, such as parents with kids, store managers and security personnel; and talking to safe adults about uncomfortable or unsafe situations.

Being familiar with tricks and practicing responses will help children safely navigate interactions with adults and strangers with confidence and awareness. For more information on children’s personal safety, I recommend The Missing Children’s Network’s Together for Safety resource booklets. They provide safety tips and advice for parents of children aged 0-6 years old, 6 – 12 years old and 12 – 17 years old.

← Black History Should Be A Cornerstone of an Islamic Education Dear Premier Ford, My Kids Disappeared from School – And No One Noticed →